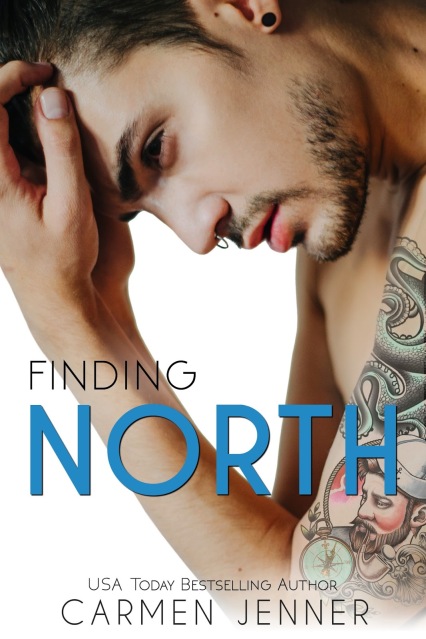 Friends since kindergarten, North had been the one to jump first, and his fall into Will’s bed ten years ago had been no exception. Will and North had been inseparable, but things change, people grow apart, and even a blazing flame can dwindle to a dying ember over time.

The more things change the more they stay the same.

After a run in with a bottle of Bundy rum, Will and North find themselves in a compromising and all too familiar position.

Blurred lines, bad decisions, and one wrong foot after another lead these two down a spiral of sarcasm, secrets, and sex, but when North’s hetero status is called into question he can’t figure up from down. And despite Will telling himself he wouldn’t fall again, he’s head over heels and wandering without a compass.

Love … shouldn’t be this damn hard to figure out.
ADD TO GOODREADS

Carmen Jenner is a thirty-something, USA TODAY and international bestselling author of the Sugartown, Savage Saints, and Taint series.

A tattoo enthusiast, hardcore MAC addict and zombie fangirl, Carmen lives on the sunny north coast of New South Wales, Australia, where she spends her time indoors wrangling her two wildling children, a dog named Pikelet, and her very own man-child.

A romantic at heart, Carmen strives to give her characters the HEA they deserve, but not before ruining their lives completely first … because what’s a happily ever after without a little torture?