DISCLAIMER: This book contains depictions of graphic situations. As such, it is not suitable for all readers.

He kills; She heals. How do you choose- heart or head?

From the outside, it appears that Juliette Patrice has the perfect life. Her career is her number one priority, matched only by her desire to fulfill her parent’s enormous expectations.

Lucas ‘Timber’ Blake is the Sergeant-At-Arms of the Black Shamrocks MC. A violent man who cares only for his Club and his family, he’s wrong for Juliette in every logical way.

Still dealing with the fallout from the explosive events earlier in the year, Lucas is tested further when Juliette is dragged into the middle of the war between rival Clubs. A war that’s already had fatal consequences.

Common sense tells her to run. Her emotions compel her to stay. The time has arrived for Juliette to begin MAKING CHOICES.

DISCLAIMER: This book contains depictions of graphic situations. As such it is not suitable for all readers.

When a monster owns your past, can you control your destiny?

Only daughter of the volatile President of the Black Shamrocks MC and long-suffering sister to four overprotective brothers, Madelaine O’Brien has survived circumstances that would have broken a lesser woman.

Mik ‘Mad Dog’ Kennedy is her salvation, her reward for continuing to fight, and the matching piece of her soul.

With her life finally happy and on track, will the reappearance of the monster from her past be the event that finally breaks her? Or will he be the catalyst she needs to put it all behind her, once and for all?

They say when life gives you lemons; make lemonade. What do you do when life sends you demons who refuse to stay buried? Do you lie down and accept defeat or rise to the seemingly unwinnable challenge, and start SEIZING CONTROL? 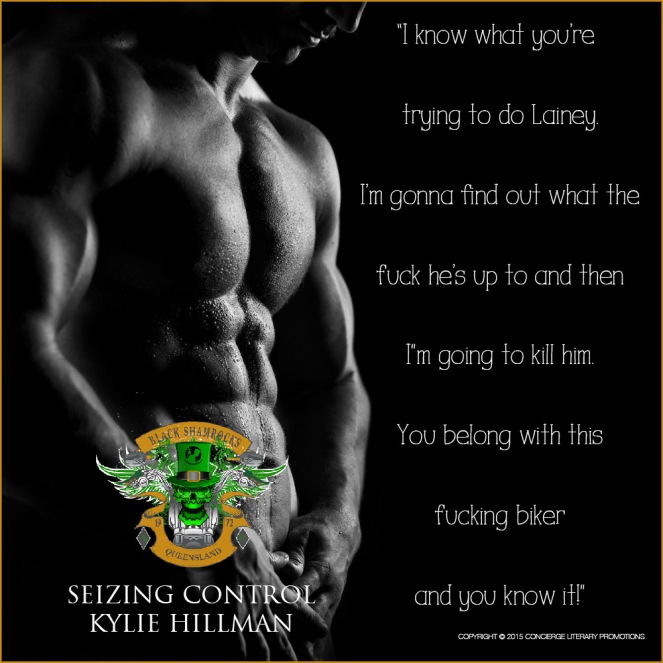 Kylie Hillman is an Australian author.

She is also an avid tea drinker, a connoisseur of 80’s/90’s rock music, and is known for lacing everything she says with sarcasm and inappropriate innuendo.

Formerly working in finance, she was forced to reevaluate her plans for her life when severe Crohn’s disease brought her corporate career to a screeching halt. Restarting her childhood hobbies of writing and reading to alleviate the monotony of being sick and housebound, she found her calling and is enjoying life to the max. A typical day is spent in the ‘real’ world where she hangs out with her awesome family and ‘book’ world where she gets to chill with her fictional characters.

Kylie writes the books she wants to read. A lover of strong men who aren’t perfect and aren’t afraid to admit it, straight talking women who embrace their vulnerabilities, and real life gritty stories, she hopes these themes shine through her writing. An avid reader of all genres, Kylie hopes to release books that keep the reader on the edge of their seat- be it with suspense, romance, or laughter.

Her debut, Seizing Control, is book one in the Black Shamrocks MC series. It is a dark, gritty, and sexy story following the Club and the O’Brien family. Making Choices, book two in the series will be available in December 2015. It is anticipated that the series will contain five full length novels.

Brawl, her NA MMA standalone will be available in February 2016.

Come join in the celebrations of the re-release of Seizing Control and the Cover Reveal of Making Choices by Kylie Hillman. Guaranteed to be alot of fun with lots of authors and giveaways.