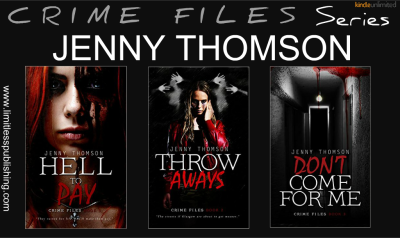 The CRIME FILES SERIES by Jenny Thomson is AVAILABLE NOW! These books are a MUST if you’re a fan of the thriller, mystery, and suspense genres! 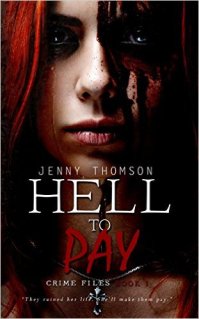 HELL TO PAY – Book #1
– SYNOPSIS –
Nancy Kerr refuses to be a victim—even when she walks in on her parents’ killers and is raped and left for dead…
Fourteen months later, Nancy wakes up in a psychiatric hospital with no knowledge of how she got there.
Slowly, her memory starts to return.
Released from the institution, she has just one thing on her mind—two men brought hell to her family home.
Now they’re in for some hell of their own…
– PURCHASE –
AMAZON US ➜ http://amzn.to/1MABiQL
AMAZON UK ➜ http://amzn.to/1ExdHvz

Huddled in a doorway, in a blonde wig, and my best Pretty Woman outfit, I’m already soaked to the skin. As downward spirals go, this was bad.

But I wasn’t here because I was reduced to turning tricks for a living. I was here to catch a killer…

When Suzy Henderson was found dead in a landfill site, her eyes pecked out by crows, they found the finger of another missing woman wedged in her throat.

Nancy Kerr and Tommy McIntyre are on the case and they won’t stop until they find the missing women.

But, how can they trust anyone when they can’t even trust each other?

DON’T COME FOR ME

What if you were charged with your boyfriend’s murder, but you knew he wasn’t even dead?

That’s the position rape survivor Nancy Kerr finds herself in. Now, she faces a race against time to find Tommy before she’s convicted of his murder.

But, someone doesn’t want her or Tommy’s Special Forces buddy, Eric from finding out the truth.

And getting too close could get them killed.

– JENNY THOMSON –
Jenny Thomson is an award-winning crime writer who has been scribbling away all her life. She also writes as Jennifer Thomson.
Inspired by her love of zombies and The Walking Dead, she wrote The Restless Dead.
She kills people for a living in the Crime File series of books for Limitless Publishing. Book 1, 2 and 3, will be out soon. To find out more details, check out her publisher’s site at http://www.limitlesspublishing.net/authors/jenny-thomson/
Her novella, How Kirsty Gets Her Kicks, about a one legged Glasgow barmaid who goes on the run with a gun and a safe load of gangster’s cash after killing one of his henchmen, will be published by Second Life Press.
She blogs about writing at http://ramblingsofafrustratedcrimewriter.blogspot.com/ and about zombies at http://deidbastards.blogspot.co.uk
TWITTER: https://twitter.com/jenthom72
WEBSITE: http://jennifer-thomson.blogspot.com/
FACEBOOK: https://www.facebook.com/HelltoPaybyJennyThomson