It was a modern take on an arranged marriage that was supposed to lead to my happily ever after. The rules were simple:
1. Marry a complete stranger chosen for you by professionals.
2. Live together as man and wife for eight weeks while cameras record your every move.
3. Make a decision to stay together or get a divorce.
Call me crazy, but I had complete faith in the process, until I saw who was waiting for me at the end of the aisle.
Austin James has never met me, but that doesn’t mean I don’t know him. With no other choice, I say my vows and pray I can make it through the next eight weeks. Then I’ll leave. What connects us is my best kept secret, and I’ll protect it at all costs even if that means walking away from the only person I’ve ever cared about.

“5 HUGE Stars to Author Rachael Duncan for Hopeless Vows…LOVED IT! Addicting, captivating, unique, inspiring, sexy, snarky, humorous, intriguing, and I could go on and on.” -Ena @Swoon Worthy Books

“It’s an unconventional romance that has many twists and turns and will leave you breathless, crying and cheering all at once!!! Put this on your MUST READ ASAP lists!!!!!” – Goodreads Reviewer

My cheeks sting from the constant stream of tears, the acid from my dark heart pouring out and burning my skin. I thought I had escaped my past and moved on, but I was wrong. Really, no one can escape the demons that haunt you. All you can do is run and hope it never catches up. This time, I wasn’t fast enough. 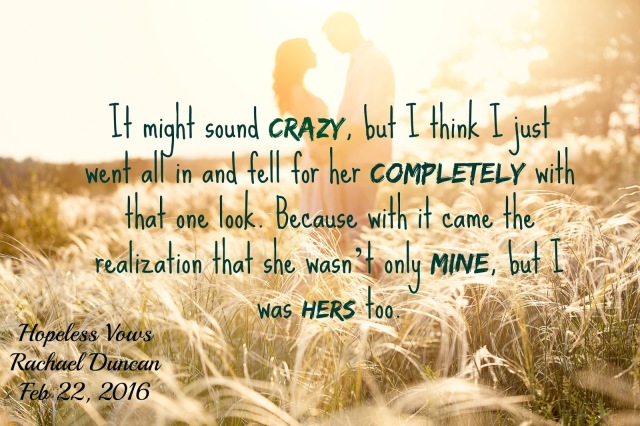 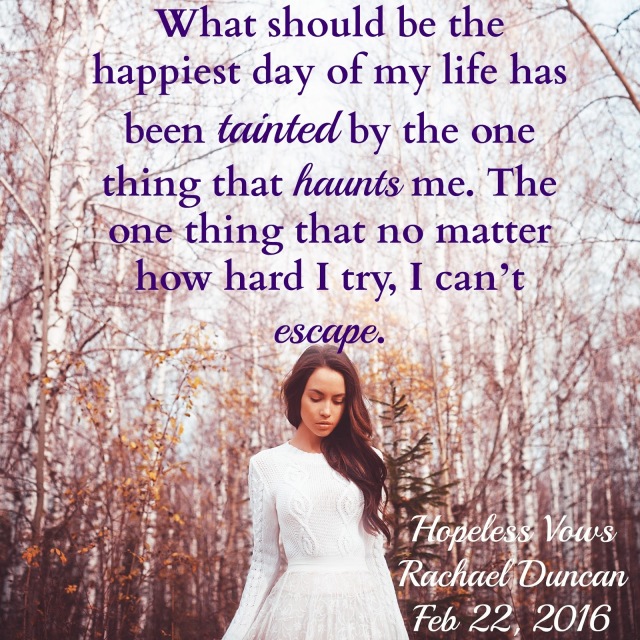 Regret is a motherfucker. She follows you, seeping into the smallest of crevices to find and hold you prisoner. Time might distance her, but she’ll always reappear to remind you that you’re a piece of shit that fucked up royally.

Rachael Duncan is an Army wife to her amazing husband, Steven, and mother to their beautiful daughters, Natalie and Zoe. She grew up in Nashville, Tennessee and went off to graduate from the University of Tennessee with a bachelor’s degree in political science. With initial plans to work in politics, she moved to Washington, D.C. and worked on Capitol Hill for a House Representative. After a short time, she realized it wasn’t for her and began pursuing other careers until she started writing.
She’s author of Tackled by Love and The Lies and Truth Duet.