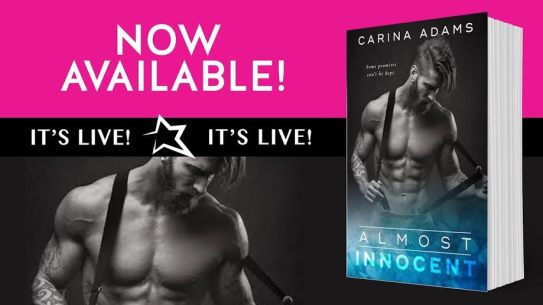 Callaghan. A name synonymous with power and fear. A family of untouchable criminals.

As a teenager, Gabriella Forte had no intention of getting to know the town’s most dangerous brothers. Once Dustin set his sights on her, she was trapped. There was only one way out of her personal hell.

Declan was determined to break away from his family’s shadow. Until he fell in love with the one woman he couldn’t have. She changed everything.

Life isn’t always kind. Love can hurt. Sometimes you need to sacrifice yourself to protect the people you care about.

It’s been twelve years since Declan did the unthinkable and went to prison. He promised to stay away from Gabby and his nephew. That’s one vow he can’t keep.

Things aren’t always what they seem. Facts are only as credible as the person stating them. The truth doesn’t always set you free.

Warning: This is a dark romance. If domestic violence bothers you, if you can’t read violence in literature, or you are looking for a light and fluffy read, this book is not for you.

My first story from Carina I really enjoyed it. I found the plot flowed well and it was well written. All the main characters were enjoyable, and developed well for their roles in the story. Each character was def going through some serious issues some more than others. A very enjoyable read.

I turned into my driveway so fast I almost sideswiped the gate, then I gunned the engine, slamming on the brakes at the last minute, so I didn’t collide with my brother’s Jeep. Leaving my car door open, I raced into the house and up the stairs, then I threw my weight against the door to Dustin’s room.

Just as the gunshot echoed throughout the house, shaking the walls as if an earthquake had hit.

His room was destroyed, furniture broken and scattered around, holes in the walls, the floor covered in debris. The scent of blood hit me like a freight train. The taste of copper invaded my mouth, almost as if it was me who had been wounded, and I stumbled backward as my eyes moved over the room, desperate to find her. The closet door was flung open, hanging from only the bottom hinge.

On the floor, just inside the closet, was a man, weeping. He clutched something in his arms as he rocked back and forth, sharp wails of pain seeping from his body.

No! No. I raced to them, fell to the floor at her feet, climbed up her legs, and shoved the trembling mass away from her. Her eyes were still open, yet there was no life left in them. One of her hands hung limply at her side while the other was curled over her rounded belly, almost protectively. Fuck, no!

I sank onto my knees next to her, pulling her up to me and burying my face in her neck. Not my Gabby. She couldn’t be gone! Without her, I had no reason to breathe.

Despair filled every part of me as I clung to the woman I loved, desperate to rewind the clock and get her back. Just for a few more minutes. Just to tell her how much she mattered to me.

Without moving away from her, because I couldn’t physically let go yet, I yanked my Desert Eagle from its holster and aimed at my brother. “You were never fucking good enough for her.” I pulled the trigger without a single regret. “She’ll never be yours.”

The look on Dustin’s face was one of betrayal and surprise. I didn’t know why he felt either. My loyalty to him died the day he’d discovered I was in love with his girlfriend and decided to punish her for my mistakes. He’d been there when I stole the life from perfectly healthy and decent men, so it shouldn’t be a shock that I’d relieved his black soul from his diseased, evil existence. He flopped over to the side dramatically as I returned my attention to the woman who was my everything.

“I’m so fucking sorry, baby,” I whispered, holding her tight one last time.

A phone rang across the room, but I couldn’t move away from the woman in my arms. I cradled her head against my chest, begging God and all of the saints to grant me a miracle. I’d give my life for hers. I willed my strength into her body.

The phone rang again, this time with a commotion behind me. I snapped my head to the right, a predatory growl on my lips, daring whoever had come into the room to try to rip her from my arms. The sight of my cousin, standing just inside the door, caused rage to boil out of me.

I wouldn’t leave her for anything. Except revenge. Pressing my lips to her still warm forehead, I laid her back gently and faced the man I’d trusted above all others.

I stalked toward him, gun drawn. “Where the fuck were you?”

Mark narrowed his eyes at me but was smart enough to step back.

My best friend raised his chin defiantly, as if the love of my life wasn’t lying behind me and growing cold. “I don’t take orders from you, kid. She wasn’t yours.”

The pain that hurtled through my body was unlike any I’d ever felt, burning a path from my mind to my stomach as realization dawned. He’d known. The fucker had known and hadn’t lifted a fucking finger to stop it.

Loss—not just from Gabby, but knowing the man I’d loved as a brother was now gone—mixed with the bitter taste of betrayal and swirled in my stomach. I could finally see the man Mark had become. I hated him. He may not have pulled the trigger, but he was just as responsible for Gabby’s death as Dustin.

I lifted my arm without aiming and unloaded the magazine into him.

I sat up, gasping for air and clutching at the blanket that covered me. It was just a dream, I told myself. Just a dream. I moved quickly, throwing my legs over the side of the bed, leaning my elbows on my knees, and clutching my head.