Can two hearts come together in one divided town?
As a boy, Nash Hawthorne spent countless afternoons on the Louisiana side of Cottonbloom with Tally Fournette, wading in the river, peeling oranges and catching frogs. When illness stole his mother, Nash yearned to take Tally and run away—for good. Instead, he crossed the state line to live with his aunt. It was a short distance as the crow flies, but it swept him into a whole new world…
After Nash left, Tally managed to struggle through her own losses without him. But now that she’s crossed paths with him again—at Cottonbloom College, where the grown-up, gorgeous Nash teaches history—she is reminded of their cherished youthful connection…and an attraction that has only gotten stronger with age. Between Tally’s possessive ex and Nash’s snobbish aunt, no one thinks they belong together. In a town torn apart by old resentments and rivalries, can they find their way back to the life they once shared—and turn their long-lost dreams into a real and lasting love? 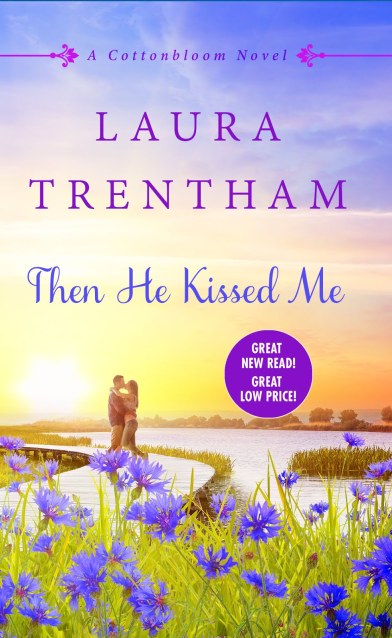 “Appealing protagonists, a heartwarming relationship, and descriptions so vivid one can feel the steamy heat and the river mud between their toes make this a perfect, lazy summer read.” ~Library Journal

“Do you like small town romances that avoid saccharine and surrender to real? Read this book!” ~Fresh Fiction

“Equal parts funny, romantic and sexy. It had a little bit of everything that I love in a romance.” ~5 stars from Wishful Miss Book Reviews

“There’s one thing on my list I haven’t told you about.” The tease in Nash’s voice had been roughened away.
“How am I going to help if you don’t tell me?” Tally couldn’t stop staring at his mouth, and dabbed her tongue along her lower lip.
“I wasn’t sure if you’d be willing to help me cross it off.”
“Is it dangerous?”
“Could be. Might start a fire even.” He removed his glasses and tucked them into a pocket of his shorts.
The moon had risen and his brown eyes seemed to reflect back the meager light.
“I want to kiss you.” The words fell between them like it was a done deal, yet he moved more like a predator, slowly, cautiously, giving her a fighting chance at escape. “Not a peck on the cheek like when we were eight, but an honest-to-goodness, grown-up, man-woman kiss. Does that freak you out?”
It totally did. Not because she was disgusted or creeped. The opposite. The compulsion to kiss him at the river had almost overtaken her. But this was Nash. Her Nash. Her stomach spiraled in a slow arc of nerves and anticipation.
Whenever she was nervous about something, like the school spelling bee, Nash had made her list the worst, most outrageous things that could go wrong. She reverted to old habits, the questions popping out in a rush of words. “What if you start thinking about Charlemagne to keep from being bored? What if you’re totally grossed out? What if you can’t look at me the same way? What if we can never be friends again?”
She had backed into the tower, and he braced his hands on either side of her head. “I can guarantee I won’t be disgusted or bored. I’ve been thinking about kissing you since that first night at the Rivershack Tavern. Maybe you’ll hate me slobbering all over you.”
“Maybe,” she whispered, even knowing it was a lie. Every part of her was drawn to him like filings to a magnet. Good sense kept her from confessing her biggest fear.
What if she didn’t want him to stop at a kiss?
“Listen, this is just an item on my list. One kiss. If the kiss is weird and either one of us doesn’t like it, let’s agree that it won’t affect our friendship. We’ll keep hanging out.”
“What if we do like it?” The possibility threw open a door she wasn’t sure she wanted to slam shut or run through.
“Well then. I might have a lengthy addendum to my original list.” He cocked his head. “What’d you say we do something really crazy?”
Unlike at the river, the narrow platform offered no escape, and she was glad. She didn’t want to escape, even as the most vulnerable parts of her screamed at her to run. While she was perfectly willing to risk life and limb and trouble with the law, the risk Nash posed to her heart was too great to contemplate. But this was only a kiss—how dangerous could it really be?
“Okay.” The word came out as soft as a breath.

An award-winning author, Laura Trentham was born and raised in a small town in Tennessee. Although, she loved English and reading in high school, she was convinced an English degree equated to starvation. She chose the next most logical major—Chemical Engineering—and worked in a hard hat and steel toed boots for several years.
She writes sexy, small town contemporaries and smoking hot Regency historicals. The first two books of her Falcon Football series were named Top Picks by RT Book Reviews magazine. When not lost in a cozy Southern town or Regency England, she’s shuttling kids to soccer, helping with homework, and avoiding the Mt. Everest-sized pile of laundry that is almost as large as the to-be-read pile of books on her nightstand.