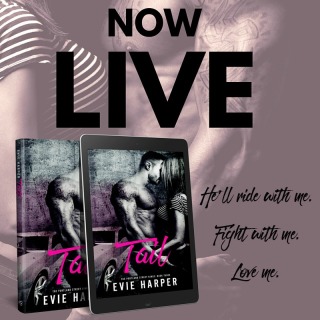 Blurb:
“I had trusted him. I had loved him…”
Dom was the mysterious bad boy all my brothers warned me to stay away from. Even so, when I looked into his eyes, I saw someone I had to know. A man, who with a single touch, sparked a desire deep inside me.
I was wrong to trust. Mistaken to hope.
Brokenhearted
Betrayed
And on the run…
Dom Haynes, a man determined to protect that which he ruined. He thinks he can save us…he can’t. I’d given Dom my heart, and I don’t want it back, for fear of feeling, it’s broken insides.
I’m Della King, little sister to the infamous Portland Street Kings. However, I’m not the same woman I used to be. Nightmares I thought I’d controlled we’re once again taking hold.
Doms intentions are clear. He wants a second chance. Hate him or love him, he isn’t going anywhere.
He’ll ride with me.
Fight with me.
Love me.

Tail by Evie Harper is Dom & Della’s story, I enjoyed this and was really excited to start!

As with all of Evie Harpers book she seems to throw us straight into the action and heart break in her Prologues which always has me wondering what the heck happened? Did things turn out how I would want them to? With Evie I know that we can always expect some action and suspense in Tail we see a lot of that, some interesting and unexpected plot twist, those I didn’t see coming but it makes me excited for the next Portland Street Kings book!

In tail I did find Della somewhat frustrating, I wish she had of relaxed a little and not been such an uptight biarch, in saying that I can 100% get why she was like that, I felt like she was just protecting herself, she was broken and experienced some seriously traumatic stuff, what’s a girl to do expect build herself some walls and let no one in even if that guy goes by the name of Dom and is risking everything and would do anything to protect her? Move over Della I’ll take your place 🙂 as for Dom what can I say? Perfecto, loved him he’s a fighter that guy no matter how many verbal beat downs he was receiving from Della he still protected her even when at times I wish he’d just leave her lol *sighhhh* that’s love though right? Fight, fight hard and never give up! We also got see the brothers again, hellloooo boys 😉 love all of these dudes, fiercely protective and overbearing of the ones they love!

I really enjoy Evies writing, its refreshing that its not all lovey dovey kissy kissy stuff, which for me if you don’t have lovey dovey stuff and I can finish your book, we have a winner! All in all I really enjoyed Tail, I felt like the story line was great and I am really looking forward the 4th book in the Portland Street Kings series.

About The Author
Evie is an Australian author whose passion for reading led her into writing. Evie spends her days writing heartbreaking, suspense-filled love stories with happily ever after’s. Evie’s characters are strong alphas with even stronger heroines who bring sexy sass to the relationship. 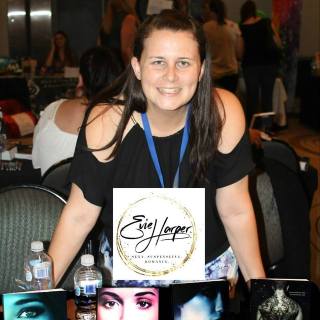 Connect With Evie:
For all updates and announcements, sign-up to Evies Newsletter
If you prefer to only be notified when Evie has a new release then her New Release Alert is for you.
Be sure to follow her here:
Facebook
Instagram
Amazon