I can’t stand him.

He’s a distraction I don’t need.

She’ll say yes eventually because I’m not giving up.

Justine Porter is stuck between a rock and a stripper pole. She lost her law school scholarship, which means she has two choices to keep her life on track: strip for her tuition or tutor the most distractingly sexy guy in her class—the one she’s been turning down for two years straight. It should be an easy choice, but tutoring Ryker Grant could derail her plans to graduate with honors faster than two-for-one night at the Déjà Vu. Then again, topless has never really been her color.

She could take the easy road, just this once . . . but the deal has enough loopholes to trip anyone up.

Who knew they taught bad judgment in law school?

Meghan March has done it again, bringing us another steamy read full of lust between the main characters. I really enjoyed Bad Judgment. Justine & Ryker were great characters lots of push pull between them in the beginning. A few twists and Justines determination to succeed and do good on her own was admirable I loved that about her. Ryker has some great depth about him

At first I thought maybe he was going to be the typical bad boy kind of guy but I really grew to love him. The twists and turns in the book kept me intrigued the whole way through, wanting to see the outcome. I really enjoyed this Bad Jugdment this would be a top recommendation from me!

“I’ve got some things I need to say to you, and you’re going to let me.”

Her brown eyes snap up to mine, surprise clear in them. “Why should I?”

“Because you’re nothing if not curious, and you want to know what I have to say.”

She steps backward, and I let my fingertips trail across her skin before they drop away. Justine adjusts the straps of her backpack on her shoulders and tucks Chewbacca into a side pocket.

“You know you want to hear the rare sound of me apologizing, don’t you?”

Justine purses her lips, and all I can think about is the dreams I had all weekend of her staring down at me from a stage while she danced and stripped. My own private show. I’m not going to admit how many times I jacked off to the mental picture. I need the real thing, and I won’t have another shot if she won’t even give me a chance to talk to her.

I don’t know what changes her mind, but she relaxes her posture and relents. “Fine. You’ve got five minutes. This better be good.”

It’s not much, but I’ll take it. I lead the way out of the classroom, slipping out the side door I used to make my unobtrusive entrance. Or at least, it was unobtrusive until I decided to share my strike-out history with the entire class at Professor Turner’s invitation.

Glancing behind me, I’m marginally surprised to see Justine actually following. I head for the third-floor doors to the library, where the private rooms are. This conversation isn’t for public consumption.

The first private room on the right is empty, so I push the door open. Justine trails me inside, and I shrug off my backpack and drop it on one of the four chairs.

She closes the door behind her and leans against it, her arms crossed over her chest. I’m guessing she wouldn’t stand that way if she realized how it draws attention to her chest. I force my eyes back to her face. I’m not about to fuck this up.

“Wow, you must really plan on groveling if you need privacy,” she says, an eyebrow raised in challenge.

“Maybe I just wanted to get you alone.”

She rolls her eyes. “And I’m already getting bored.”

“I don’t really like to think about your balls, if you want to know the truth.”

I try on my charming smile, the one that has dropped panties for years. “I’m calling bullshit on that. You’ve thought about me at least once.”

She pushes off the door and turns halfway to reach for the handle. “And if that’s all you wanted to say, then I think we’re done here.”

I’m shocked when she listens.

Justine rubs her hands over her face, her every move revealing her frustration. “You ask me out for two years, practically blackmail me into a kiss, then you blow me off completely, and now you’re all up in my business again. What the hell do you want from me?”

Her confusion punches me in the gut, making me wish I could tell her why I wasn’t there the morning I promised to help her move. It wasn’t for any reason she thinks.

I stride toward her, pressing one palm against the door beside her head. “I’m not blowing you off, and I haven’t stopped thinking about that night.”

I can’t give her the explanation she wants, so I try something different.

Lowering my head, I catch the next words out of her mouth on my lips. They’re just as soft as I remember, and I drop my other hand to her hip, drawing her against me. Her fingers curl into the fabric of my T-shirt, almost reluctantly, but she’s not pushing me away.

I take her mouth, my tongue diving between her lips to taste her again—finally, but the pulsing of my dick against the zipper of my jeans forces me to back off. If I don’t, I’ll be laying her out on the table behind us, and that’s not what this is about. At least, not all of what this is about.

With her face flushed and her hair messy from my fingers, Justine shutters her expression. She’s rebuilding her walls brick by brick.

That’s not going to work for me.

“What’s it going to take, Justine?” I remember asking her the same question at the bar.

Her dark eyes fill with confusion. “What’s what going to take?” The words come out defensively.

“With you. To get a second chance. I fucked up once, but doesn’t everyone deserve another shot?” 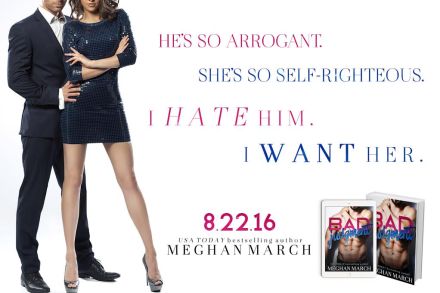 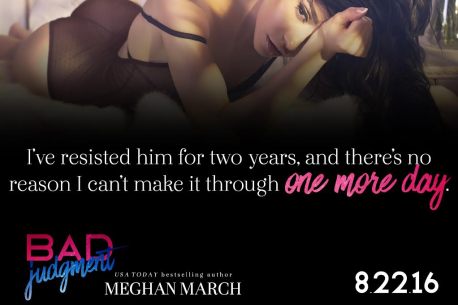 Meghan March has been known to wear camo face paint and tromp around in woods wearing mud-covered boots, all while sporting a perfect manicure. She’s also impulsive, easily entertained, and absolutely unapologetic about the fact that she loves to read and write smut. Her past lives include slinging auto parts, selling lingerie, making custom jewelry, and practicing corporate law. Writing books about dirty talking alpha males and the strong, sassy women who bring them to their knees is by far the most fabulous job she’s ever had. She loves hearing from her readers at meghanmarchbooks@gmail.com.