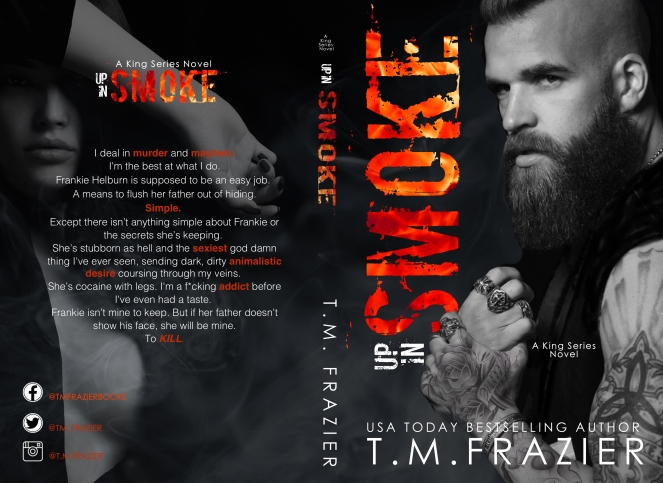 I’m a man without a conscience.

I deal in murder and mayhem.

Frankie Helburn is supposed to be an easy job.

A means to flush her father out of hiding.

Except there isn’t anything simple about Frankie or the secrets she’s keeping.

She’s stubborn as hell and the sexiest god damn thing I have ever seen, sending dark, dirty animalistic desire coursing through my veins.

I might have her, but she isn’t mine to keep.

If her father doesn’t show his face, she will be mine.

** Other books in the King Series DO NOT have to be read to enjoy Smoke’s book. Up in Smoke can be read as a standalone. **

Up In Smoke by TM Frazier 4 Stars – Review by Bel Gritty, dangerous and so explosive I couldn’t tear myself away from the book. Up In Smoke was entirely addictive. Another standout novel for TM Frazier. King series fans, you NEED this book in your life. Don’t hesitate. Up In Smoke is a deliciously dangerous addition to the King series. If you need more convincing, I can give your four reasons: Preppy. King. Bear. Rage. Up In Smoke started off with an absolute bang. A killer prologue giving me all the chills and giddy with excitement. Followed by an opening scene that hit me with all the feels. So that’s how most of my emotions processed as this fast paced story unfolded in all it’s chaotic, messy glory. Almost every moment had my heart thumping. My mind wandering wildly about what might happen next. My fingers itching to read faster. Although some of the story felt over the top and one particular scene felt completely unnecessary and infuriated me like no tomorrow (because it became a non issue within pages anyway.) I have to say, I was still very much caught up in all things Smoke and Frankie until reading, the end. Their strange er, um…. relationship, captivated me completely. Smoke and Frankie’s personalities shone through in the unconventional situation they found themselves together in. It allowed me to see how these two lonely souls would together, compliment each other and give each other strength. They were quite the duo and utterly perfect for each other. Or rather, perfectly imperfect for each other. Smoke was all hard exteriors but squishy on the inside. My heart broke for him and I found myself falling for this big guy pretty quickly. I did however feel his backstory was weak and anticlimactic. Don’t get me wrong, it was a sad story and I mourned for the boy who became lost and the man who became Smoke. But, it fell flat for me. Smoke might’ve looked like the bad guy, sounded like the bad guy and acted like the bad guy. But many moments throughout the book he was portrayed in a different light despite what we were being told with the harsh words from TM Frazier and the dark actions from Smoke meant to scare us away. I felt as though Miss Frazier couldn’t make up her mind with Smoke, which did frustrate me a little. Did she want us to think of him as this murdering, soulless man when in reality everything that had led him to where he was now was because of his feelings. His emotions? Because when Smoke fell for Frankie he fell fast which showed us the kind of man he truly was. One who lived hard and loved harder. It was impossible to believe he wasn’t capable of love when some of his inner thoughts and actions showed us otherwise. But then he also did a lot of bad shit and said a lot of bad shit. So yeah. I don’t know there. One of my favourite parts of this book was the side characters and a particular action scene playing out like a movie in front of my eyes. Miss Frazier’s writing was exceptional and the scene, just incredible. But onto the side characters, helloooo Prep! All of the side characters along with Frankie and Smoke bring the perfect amount of comedic relief to what is otherwise an emotionally ridden, seductively dark story. Nostalgia hit me hard and I couldn’t have smiled or laughed any harder in those scenes with some old favourites from the King series. Overall, I would have enjoyed longer than a mere second at the end to appreciate the place Smoke and Frankie had gotten to after the chaos that was their lives. I feel as though a special moment was overlooked and under valued at the end of Up In Smoke. Without going into too much detail to ruin the story, the very end of the novel held what I felt was a monumental moment for Smoke. Yet it seemed overlooked when this particular moment if explored, could have hit readers with all the feels and given us, as well as Smoke, a sense of everything coming full circle. But hey, it’s not my book and sure as hell was one hell of ride! Dark romance and romantic suspense lovers, get your hands on this book! You won’t regret it

“All these bruises,” Smoke muses. “And not one of them caused by me.” He trails a hand up my arms and down my flat stomach. “Pity, but I still have time to leave my mark on you yet.”

My entire body stiffens. I’m as rigid as a corpse.

Smoke chuckles and I’m glad I’m facing away because his laugh is pure torture, causing his erection to vibrate against my folds which are aching for more contact.

“You will be punished, hellion. You can be sure of that.”

I look over my shoulder and meet his dark eyes which darken even further as his pupils dilate. His lingering gaze rakes me over from my feet to my breasts and back down to the space between my thighs. He licks his full bottom lip.

My stomach flips. My will to fight him off doesn’t waiver, but my body isn’t getting the message. My core clenches again. I turn back around to face the tile, digging my teeth into my lower lip until I taste my own blood.

His chest presses against my back, and his hardness pulses between my legs, rubbing against my inner thighs. He squirts some shampoo in his hand, working it into my hair. He tilts my head back and rinses my hair then slides his slick and soapy hand down my body.

I’m breathing rapidly now. Short quick breaths I can’t control. There’s a deep rumble in his throat. His hand travels lower and lower on my stomach until it’s between my legs. He’s working his thumb over my swollen nub, sending sparks of need, pangs of pleasure, and a wave of self-hatred, surging within my battered body and bruised soul.

“What…what are you doing?” I ask, seeing flashes of white hot lust behind my closed eyes.

“More questions…” his voice a hearty amused rasp. His fingers circle my clit while he continues to rock his hard cock between my legs. The pressure building is so strong it borders on painful.

Tears leak from my eyes. I’m so fucking mad at myself for being turned on. For Smoke being right. I’m so wet. He feels it. There’s no way he can’t feel it.

He leans in close. I’m stone still except for the tremors gripping my body. He licks the tear off my cheek and groans. He dips the tip of his finger inside of me and I tighten around the intrusion. It’s a foreign sensation. Strange. It feels both wrong and right. Pleasurable and painful. “Your tight little pussy is weeping too. I wonder if its tears taste the same.”

I look over my shoulder as he withdraws his finger and sucks it into his mouth. He groans. “Fear or desire. They both taste real fuckin’ good to me.”

He places his hand back between my legs. When I try to squeeze my thighs together to keep him out he parts them with his knee on a grunt and begins circling my clit again. This time harder. Faster.

I’m staying as still as I can, but when I feel something begin to happen inside my body. The sparks he ignited within me are all crashing together. I can’t hold back. My face scrunches as I try to fight the orgasm fighting its way out, but it’s no use. I can’t fight it. It’s too fucking strong. I’m so fucking close.

I arch my back without thinking, pressing my ass against him, begging for more. For what I need to push me over the edge.

Smoke hisses. “Oh, what I could do to this beautiful little pussy.”

The pleasure builds and builds as he strokes me harder. Faster. I’m about to come all over his fingers when the feeling is lost.

I can’t see through the steam so I shut off the spray and wipe the water from my eyes only to see Smoke toweling off in front of the sink on the other side of the bathroom.

The only proof I have of what just happened between us was real is his cock. Erect. Thick. Huge. The purplish swollen head bobs against his abs, jutting out over the top of the towel he wraps around his waist.

“What…what just happened?” I stammer, leaning back against the wall for support.

Smoke steps forward, and when I go to jerk back, he reaches out and pinches my nipple painfully hard. I yelp and leap back, slipping on the tile, falling on my ass, taking the shower curtain down with me.

Smoke rips the curtain off my head and glares down at me with a triumphant grin on his evil beautiful face. “What just happened was called punishment and you got off easy. Next time I’ll split that tight pussy in two with my fucking cock.”

He goes to leave but stops. “You want pain?” he asks. “I’ll give it to you. You want pleasure? Now that’s something you’re gonna have to earn.”

He leaves, slamming the door behind him.

I release a shaky exhale.

I’d hoped the rest of my time with Smoke would be tolerable, but there’s no fucking way that’s going to happen. Not now. Not with my skin crawling with need. I’m losing my mind. About where I am. About what this is all about. About this beautiful horrible evil man.

I feel like I’ve already been split in two.

What Smoke is doing to me is far more than punishment. 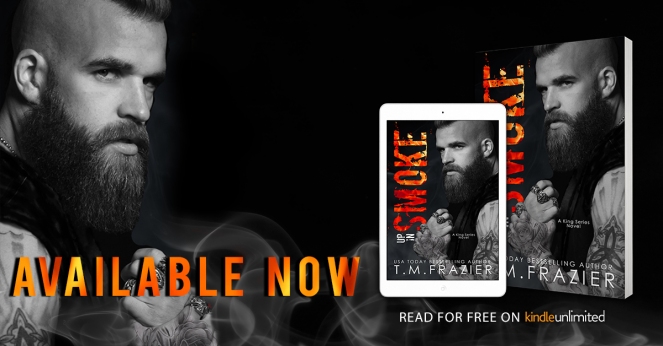 Read Up In Smoke Today!

Amazon US I Amazon Universal
Add to GoodReads 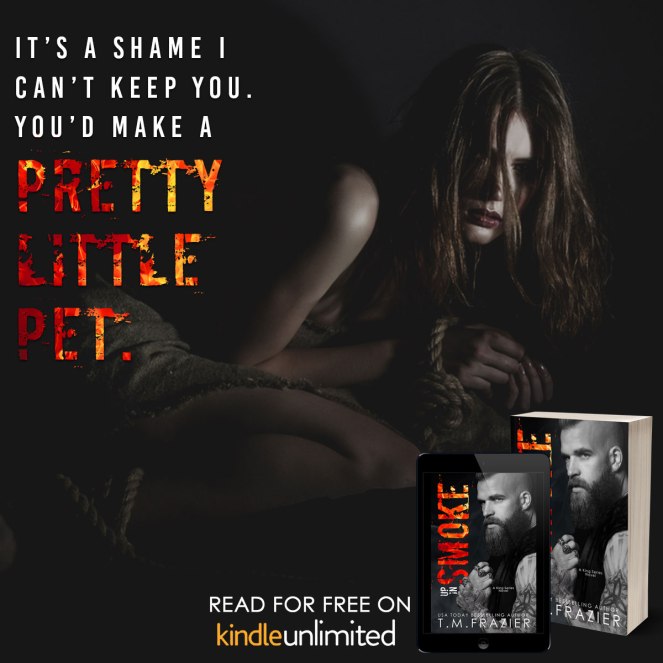 About the T.M. Frazier:

T.M.Frazier is a USA TODAY bestselling author. She resides in sunny Southwest Florida with her husband and her young daughter.

When she’s not writing she loves talking to her readers, country music, reading and traveling. Her debut novel, The Dark Light of Day was published in September of 2013 and when she started writing it she intended for it to be a light beachy romance.

Well…it has a beach in it!

Stay up to date with T.M. by signing up for her newsletter today!